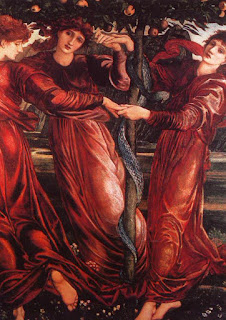 This is a straight up comparison between MYFAROG 2.6, 3.0 and 4.0 with a little bit of critique/editorializing thrown in. I do not own 1.x so that will not be included; the few things I say about the first edition are all second-hand knowledge so let me know if I got anything wrong.

- The game has had four numbered versions to date. Version 1 and further tweaked versions numbered 1.x were released as limited print runs and are all sold out.

- Version 2 was a rules overhaul intended to streamline the game and fix some bugbears. It also included some relatively minor changes to the setting. The mechanics changes were significant, and as is usually the case, these changes came with their own problems, of which the 2.6 release was an attempt at addressing. 2.7 is simply an errata version of 2.6.

- A number of splatbooks with optional rules and gameable content came out around the age of Version 2. The version 2 corebook and splats were released as POD through Amazon and are no longer available.

- Version 3.0 included a big apocalyptic twist to the setting, including the addition of many Tolkienesque/D&D tropes. It also featured some mechanics changes, most notably with playable races and the magic system. This version was also released through Amazon and is also no longer available, making versions 1 through 3.0 only available through secondary markets.

- From version 3.0 on, all the splatbook stuff is included in the corebook.

- Versions 3.3 and 4.0 (the second is an errata version of the first with different cover art) are currently available from Amazon and feature changes to the core mechanics intended to further streamline the game, as well as more setting changes, which reverse the apocalyptic event of 3.0 but preserve the Tolkien/D&D elements.

Simulationist, HEMA-inspired bent. Using Conan or Wuxia logic will get you killed in a big hurry. PCs trained in combat are significantly better at it than those who are not. Attacking an unwitting or helpless target is extremely unforgiving for the target. Armor absorbs damage, shields make it harder for you to get hit. Fighting prowess helps with defense as well as offense. A lot of rolling during combat if using most of the subsystems.

Thule is based on folklore going back to European Barbarian Antiquity, think Frazer's The Golden Bough, Tacitus, European folktales, pre-Christian paganism and animism and a bunch of original research. Feels very different from D&D, Tolkien, and other Appendix-N type fantasy. There is a clear emphasis on Germanic barbarians, but room is left for further tailoring.

The game uses Proto-Norse for a lot of names of setting-related stuff, Proto-Norse being assumed by the game to be the Thulean common language.

The game bestiary is again heavily influenced by European folklore, which is evident in the terminology, which is again different from D&D and Tolkien. As an example, in the game, the name for undead is "troll" ("screamer"), while the name for giants, dragons and other session-ending beasts is "ettin" ("giant").

While there are also clear influences from Lovecraft and the Roadside Picnic novel, the setting is very unique when compared to other RPGs.

Races: Native, Elf-born, Deity-born, Fairling, Wood Elf race-class. Arbi and Khemetian (both foreign to the default setting) as PCs possible but the book does not recommend it.

Life stances: Traditional, Religious. These basically refer to the character's worldview in regards to mysticism (animism vs polytheism).

A Traditional caster (Sorcerer) picks an element at character creation (Earth/Wind/Fire/Water/Spirit) which will limit the spells he can cast. Religious casters (every other spellcasting class) have more options but are to an extent limited by the spells their Deity can cast.

The base resolution mechanic, as well as combat etc, are virtually unchanged from 2.7. An exception to this is stat modifiers.

The new setting does not rewrite the prior one but advances it thousands of years into the future, after a worldwide apocalyptic event. All permanent settlements of old have been swallowed by Jötunnheimr (the ettin-fog EtunahaimaR from previous editions) and are now populated only by hordes of wraiths. Fairlings, Arbis and Khemetians have disappeared. The Deities have left. Magic is rarer.

The common language is now Old Norse. Only the elves speak Proto-Norse.

Social Class and Cultural Background are removed from the game, though outlawry is still mentioned. Life Stances stay the same.

Spell list reworked. Sorcerous casting is more versatile (Sorcerers do not have to pick an element at character creation), but this is somehow limited by stat modifiers. Wil is less important and Int is more important for spellcasting. Favor Points and Divine Aid removed, Sorcerers no longer spend Stamina to cast. Sorcerous and Religious spellcasting is made more similar: every spell must be learned regardless of the class of the caster, effectively nerfing the versatility of Religious spellcasters. New specific spells tied to the race-classes.

Attacking unwitting or helpless targets is nerfed. Armor no longer absorbs damage but instead makes it harder for you to get hit. Fighting prowess now only helps with offense. Because attacks are rolled on a d20, it is now easier to roll attack, damage, cut and shock simultaneously with a big handful of dice.

The common language and the equipment options stay similar to 3.0.

The apocalyptic event of 3.0 is retconned, but this setting assumes a time period at least centuries after 2.x. There are no Fairlings, Arbis or Khemetians. In essence, this is is an Early Medieval, Tolkien-like setting considerably more similar to traditional D&D fantasy.

The changes from 3.0 remain, but PCs can learn twice as many spells, it is easier to learn more powerful ones, and learning of spells of different elements by Sorcerers is easier since it does not depend on stat modifiers.

What is to be done? (editorial)
MYFAROG 2.6 was responsible for seriously getting me into TTRPGs in my adult life after a brief stint as a young teenager. The game has always had some good mechanical ideas, but what really drew me in was the setting and how unique it was.
When I bought 3.0 I wasn't wowed. Setting-wise, though the apocalyptic idea was intriguing, I didn't like the shift towards Tolkien; we already have MERP for crunchy Tolkien. And in regards to the core mechanics it was basically the same game except for Magic. The "Deities have left" and "Sorcery is rarer" concepts also didn't really hook into the mechanics as much or make perfect sense with the rest of the setting.
Now that I have a copy of 4.0 in my hands, I'm happy to see the core mechanics changes and I think I'm gonna like trying them out, but I'm really not pleased with the direction the setting is taking. In my mind the special element of MYFAROG has always been Thule, not the rules. I think these setting changes significantly water down Thule. The change from Proto-Norse to Old Norse, for example, makes some sense given that the timeline has been advanced, but moves the setting from a more general Barbarian feel to a specific Viking feel. Doing away with Cultural Backgrounds has the same effect. Details matter.
If I went back to running MYFAROG, I would take the 4.0 changes to the core mechanics and port them back to the setting from 2.x. That's where Thule is for me. Not generic, not Medieval, not Appendix N, D&D or Tolkien, but its own beast. I love D&D, but I come to MYFAROG for something unique.
MYFAROG is a personal passion project for Varg Vikernes. He is clearly writing the game he would like to be playing. The players in his home game are his kids. I understand why he's taken the Tolkien direction; the kids want to play in that world, and he wants to use the old modules he's got lying around from other systems. However, given that the setting for 2.x is fundamentally different than the one for MYFAROG 4, it's a real shame that 2.7 is no longer for sale. I'm just glad my 2.6 book is still in usable shape.
sound of sad Thulean horn 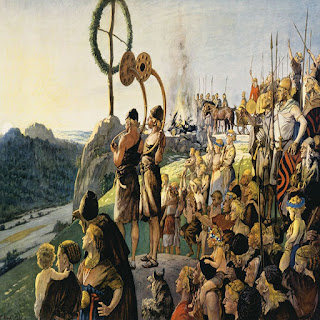