A timeline for historical games in the Lowlands 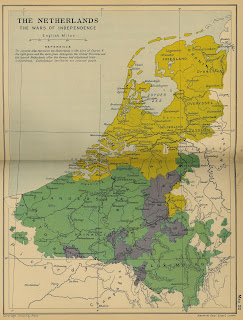 6th century: Clovis I, King of the Franks, converts to the Roman Church
1000: Pagan Saxon and Frisian religions cease to exist as such and are subsumed under Catholicism through syncretism and saint worship
1482: the Burgundian Netherlands (roughly modern-day Netherlands, Belgium and Luxembourg) are passed off to the Habsburg dynasty, who otherwise also control the Holy Roman Empire and the Spanish Empire. The region now goes by the names “Habsburg Netherlands” and “Seventeen Provinces”
1517: Martin Luther's 95 Theses begin the Protestant Reformation
1521: The Edict of Worms by Charles V, Holy Roman Emperor, King of Spain and Prince of the Habsburg Netherlands, condemns Luther's ideas, officially splitting the Church
1566: Great Iconoclasm/Iconoclastic Fury: widespread destruction of religious images across the Lowlands by Calvinist rioters. At this stage, Protestantism was mainly concentrated in the Southern provinces
1568: Revolt of William I of Orange against Philip II, King of Spain, kicking off the 80 Years War against the Spanish Empire. Amsterdam pledges support for Catholics
1576: Spanish Fury/Rape of Antwerp: unpaid Spanish troops mutiny and sack Antwerp, killing over 7,500
1578: Alteration: Amsterdam's Catholic city government deposed in favor of a Calvinist one
1579: All northern Provinces (roughly the whole Lowlands except the French-speaking south) sign Union of Utrecht, uniting against the Spanish
1581: With the Act of Abjuration, the northern Provinces officially declare independence.
Quiet Iconoclasm: Calvinist city council in Antwerp purges city clergy and guilds of Catholic office-holders
1585: Following territorial gains in much of modern-day Belgium, the Spanish retake Antwerp indefinitely. Southern Provinces henceforth known as the “Spanish Netherlands”.
Reversal of Calvinist gains in the Spanish Netherlands. War and religious persecution from the Great Iconoclasm onwards cause a steady migration of Protestants out of the Southern provinces and into the Northern ones. Many settle in Amsterdam
1609-1621: Twelve Years' Truce grants a respite from the war. Trade and art production blossom
1621: War resumes
1648: The Peace of Münster, part of the Treaty of Westphalia, officially ends the 80 Years War.
The Treaty of Osnabrück, also part of the Treaty of Westphalia, grants conditional religious freedom to “private religious services”, making secret churches legally permissible.
This timeline will be included in my upcoming LotFP-compatible pdf release "Cabinet of Curiosities", which will also include two art-heist-themed urban adventures set in Amsterdam and Antwerp and GM-kit tools. Watch this space! 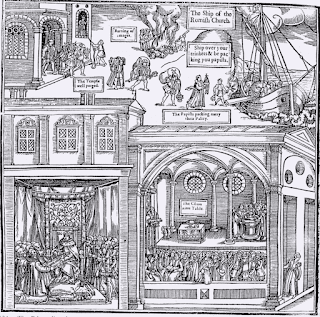